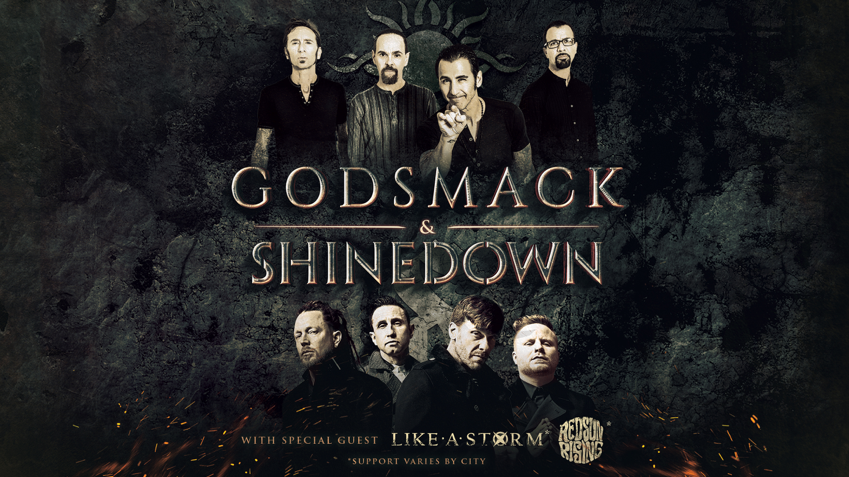 TICKETS ON SALE STARTING FRIDAY, MARCH 23 AT LIVENATION.COM
LIKE A STORM AND RED SUN RISING TO SUPPORT ON THE AMPHITHEATER OUTING 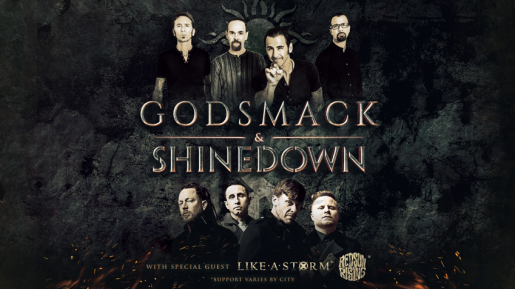 LOS ANGELES, CA (March 19, 2018) – This summer, rock fans across the country should prepare to be rocked hard when the SHINEDOWN/GODSMACK co-headlining summer tour hits more than 30 cities.  Produced by Live Nation, the six-week outdoor amphitheater tour kicks off July 22 and make stops in Los Angeles, Las Vegas, Dallas, Atlanta, New York and many more before wrapping September 2.  These dates come as both multi-platinum groups are set to release new albums: Shinedown’s ATTENTION ATTENTION  (May 4 via Atlantic Records) and Godsmack’s WHEN LEGENDS RISE (April 27 via BMG). Tickets are available to the general public starting Friday, March 23 at LiveNation.com.

Select dates of the summer tour will also be part of the popular Live Nation Ticket to Rock program. The Ticket to Rock bundle offers fans a low-cost way to see many of their favorite rock artists live in their area all summer long.

“It’s all about impact, and making a statement,” says Brent Smith, Shinedown’s lead singer.  “We are creating a show for the fans that is powerful, passionate, and sonically inspiring. The audience has given us a platform to be ourselves, and create something spectacular. That being said SHINEDOWN, and GODSMACK will most certainly NOT let them down. This will be the Rock & Roll event of the year. In other words “IT’S ABOUT TO GET HEAVY!!!”

“We really believe this could be a great moment in our band’s career and we plan on running on the road until at least fall of 2019,” Sully Erna of Godsmack says.  “We love the guys in Shinedown  and we all go way back. There is a very strong mutual respect between our camps and we feel that this tour is going to be a must see!” Adds the singer, songwriter and guitarist:  “We’re preparing ourselves to be on the top of our game!”

The tour will feature two support acts handpicked by Godsmack and Shinedown. Like A Storm will open the first half of the tour with Red Sun Rising performing on the second half.  New Zealanders Like A Storm, led by brothers Chris, Matt & Kent Brooks, with Zach Wood on drums, have become the most successful New Zealand rock band in U.S. radio history.  The band has just finished recording their new album Catacombs and a single is eminent.  Akron, Ohio’s Red Sun Rising–Mike Protich [vocals/guitar], Ryan Williams [guitar], Dave McGarry [guitar/vocals], Ricky Miller [bass/vocals], and Pat Gerasia [drums]–broke onto the scene in 2012.  Through tireless gigging, they built up an impressive local fan base.

Multi-platinum rock band Shinedown recently announced the release of their sixth studio album ATTENTION ATTENTION out May 4th on Atlantic Records. Lead single “DEVIL” is out now along with the gripping and visceral video (PRESS HERE) which has quickly amassed more than 1.5 million YouTube views. ATTENTION ATTENTION is available for pre-order now at all DSPs (PRESS HERE) and each pre-order will include an instant download of “DEVIL.” Deluxe album bundles are available at the official Shinedown webstore HERE. The 14-track album, Shinedown’s most raw and personal to date, is a mental, emotional and physical journey from ruin to reclamation to revelation. The story that unfolds as the album progresses follows an individual from life’s lowest lows to the highest highs as anxieties dissipate and demons disappear. It is a powerful and enduring statement about the resolve of the human spirit, our will to overcome struggles, and the importance of respecting and leaning on one another. With a symphony of thought-provoking lyrics, stadium-size, explosive guitars, unpredictable rhythms, and cinematic flourishes, ATTENTION ATTENTION ushers in the band’s biggest and boldest chapter yet. For a full list of Shinedown’s 2018 tour dates, please visit www.shinedown.com.

WHEN LEGENDS RISE, Godsmack’s first album in four years, is due out April 27 via BMG and marks their debut on the label. The new album comes 20 years after the release of their debut album and 20 million album sales later, Godsmack are an even stronger animal than before.  The album’s newly released single, “Bulletproof,” shows the band–Sully Erna [vocals, guitar], Tony Rombola [guitar], Robbie Merrill [bass], and Shannon Larkin [drums]–doubling down on their combination of tightly wound riffs, rhythmic fury, naked emotions and pushed-to-the-edge vocals, all fired up with melodic precision and tight songcraft. What inspired the songs on WHEN LEGENDS RISE? “It was just about evolving as a songwriter,” says singer and songwriter Sully Erna. “I wanted to stretch my wings out even further to use all the experiences I’ve had with writing different types of music over the years and applying that to find a way to introduce a newer, fresher, more mature sound, but still maintaining the power of Godsmack.”  WHEN LEGENDS RISE is available for pre-order now (here) with instant grat track, “Bulletproof.”  Listen to “Bulletproof” here. An official music video is coming soon.  For more information on Godsmack, visit the band’s website here.

The SHINEDOWN/GODSMACK summer tour dates are as follows:

&Part of Ticket to Rock bundle

Leading the charge for 21st century rock,  multi-platinum, record-breaking band Shinedown – Brent Smith [vocals], Zach Myers [guitar], Eric Bass [bass, production], and Barry Kerch [drums] – has sold more than 10 million albums worldwide, has 11 platinum and gold singles and four platinum and gold albums, and averages more than 3.3 million monthly listeners on Spotify as one of the most-listened-to rock bands on the platform with over 600 million streams, contributing to their more than 1 billion total overall streams to date. The band’s forthcoming album ATTENTION ATTENTION  is the follow-up to 2015’s Threat To Survival LP which marked Shinedown’s third straight Top 10 debut on the Billboard Top 200, arriving at #5 while also debuting at #1 on Billboard‘s Top Rock Albums Chart and bringing Shinedown‘s total count of number one rock singles to 12 thanks to hits like “Cut the Cord” and “State of My Head.” Every one of the singles released over Shinedown‘s nearly two-decade career has ascended to the Top 10 on the rock charts – a feat unmatched by any other rock band.  They began their unparalleled domination of multi-format rock radio with their 2003 platinum-certified debut Leave A Whisper and its gold-selling 2005 follow-up Us and Them. 2008’s Billboard Top 10, double-platinum LP The Sound of Madness remained on the Top 200 Chart for a staggering 120 consecutive weeks and made rock history with six #1 singles including the gold “Devour,” platinum “If You Only Knew,” and the triple-platinum breakthrough “Second Chance,” igniting a mainstream crossover and soaring to #1 at Hot AC and Top 3 at Top 40. The American Music Award-nominated band then seized #1 on the Billboard Top Rock Albums Chart and #4 on the Top 200 with 2012’s gold-certified Amaryllis, which launched three #1 Active Rock anthems – “Bully,” “Unity,” and “Enemies.” Hailed as a fiery and always exciting live act, the band continues to engender diehard love from millions of global fans and has racked up countless sold-out tours and festival headlining sets as well as numerous national television appearances such as The Tonight Show, Jimmy Kimmel Live! and TODAY.

Godsmack stand strong as 21st century hard rock titans. With an unbreakable spirit and diehard work ethic evocative of their hometown, the Boston quartet fought hard to secure a place in music history since first smashing their way on to the scene in 1998. To date, they’ve notched a staggering six #1 singles at mainstream rock radio, including “Awake,” “Straight Out of Line,” “Cryin’ Like A Bitch,” and “I Stand Alone.” Moreover, they’ve enjoyed 20 Top 10 hits at the format—the most of any act since February 1999–as well as four Grammy nominations, and were winners of The Billboard Music Awards Rock Artist’s of the Year in 2001.  Selling over 20 million records worldwide, the band has also unleashed three consecutive albums at #1 on the Billboard Top 200—namely Faceless [2003], IV [2006], and The Oracle[2010]. This places them in league with Van Halen, U2, Metallica, Dave Matthews Band, and Linkin Park who have also enjoyed the same streak. Moreover, the accomplishment on the road remains staggering with headlining sets everywhere from Mayhem and UPROAR to Rock on the Range. Godsmack released the successful and acclaimed 1,000 HP in 2014, and their domination continues with the release of When Legends Rise, their seventh full-length album in 2014. They still stand alone. 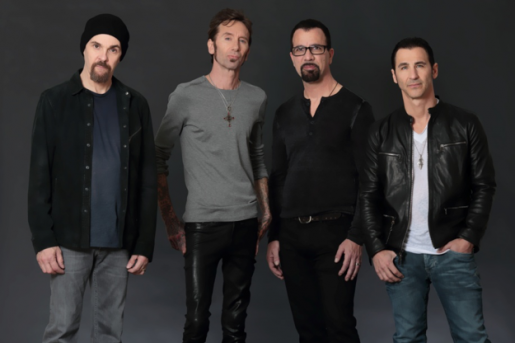 For more information on GODSMACK, visit: