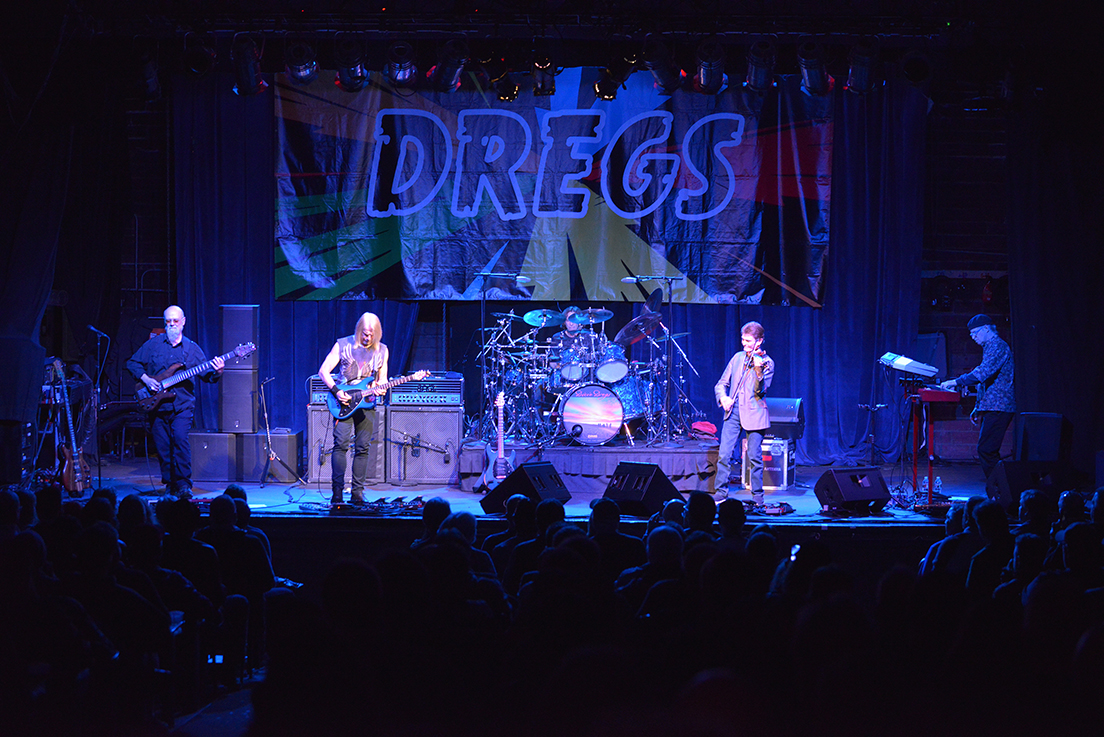 “Dawn of the Dregs” tour landed in Kent, Ohio last night as The Dixie Dregs came into town to play their 21 song, two set and one encore set list.  The Kent Stage, a 600 plus seat venue was nearly sold out.  The theater was built in 1927 and started out as a local movie theater.  The stage was created in 2002 and has been home to many great acts.  It was a perfect place for the Dregs to play as the last time the original five toured was nearly 40 years ago.  An aging band and an aging venue made for a perfect fit for the both of them. 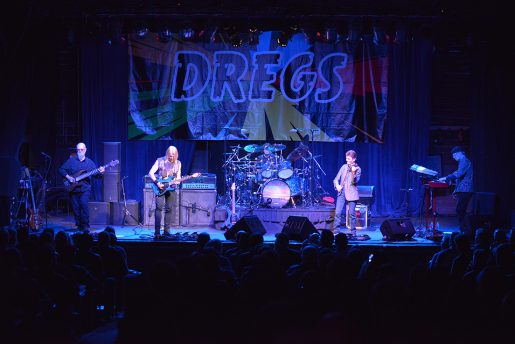 Primary composer, co-founder and guitarist Steve Morse along with drummer Rod Morgenstein were rejoined by bassist Andy West, violinist Allen Sloan, and keyboardist Steve Davidowski made up the original five and yes, you guessed it, the lineup that took over The Kent Stage.

You may know guitarist extraordinaire and Ohio native, Steve Morse from his Deep Purple fame, but his roots began with The Dixie Dregs back in the 1970’s.  Joined by his band-mates, the show didn’t disappoint.  Each member of the band played flawlessly, each breaking away during a song and playing their instruments to perfection.  Their sound, sometimes called ‘fusion’, could also be called ‘progressive’ along with ‘jazzy’, or simply put, ‘Rock’ in its truest form.

When Steve broke away and played his amazing guitar licks, he tore up his guitar’s fret-board and, well, let’s just say if he had more frets on his fret-board, he would have torn those up too.  You could tell he and his mates were on stage just having a blast.  Bassist Andy West, and band spokesman for the night would occasionally introduce the songs.  He did this to give everyone in attendance a history lesson as to what the band was thinking when they wrote and recorded the songs.   One of the songs, ‘What if’, he said, was a transcendental song that back in the day they played lying down, however, he told the crowd, you’ll have to imagine how dreamy that was back then because they are definitely not laying on the stage tonight.

If you had your eyes closed during some of the songs, you would think at times you were listening to Emerson, Lake and Palmer, or maybe Kansas, the only thing lacking were vocals, you see, there weren’t any…if you didn’t know, The Dixie Dregs are a purely instrumental band.

The beginning of the second set started out with one fantastic violin solo performed by perhaps one of the best, Allen Sloan.  The pace seemed to pick up in the second set as the band outplayed themselves yet again.  Each of them fed off of each other playing music that has stood the test of time and is sure to deliver for another forty years.  Ending their set with ‘Cruise Control’, the band quickly returned for two final songs before calling it a night.

Now, listening to the band play live, requires a bit of concentration, and or focus, and you have to pay attention as the solos jumped from one member to another, however; if you came to relax and have fun, well they accomplished that for you too.  The show was a joy to listen to and you had to have left satisfied or you weren’t really there.

PWR BTTM At The Garage In London