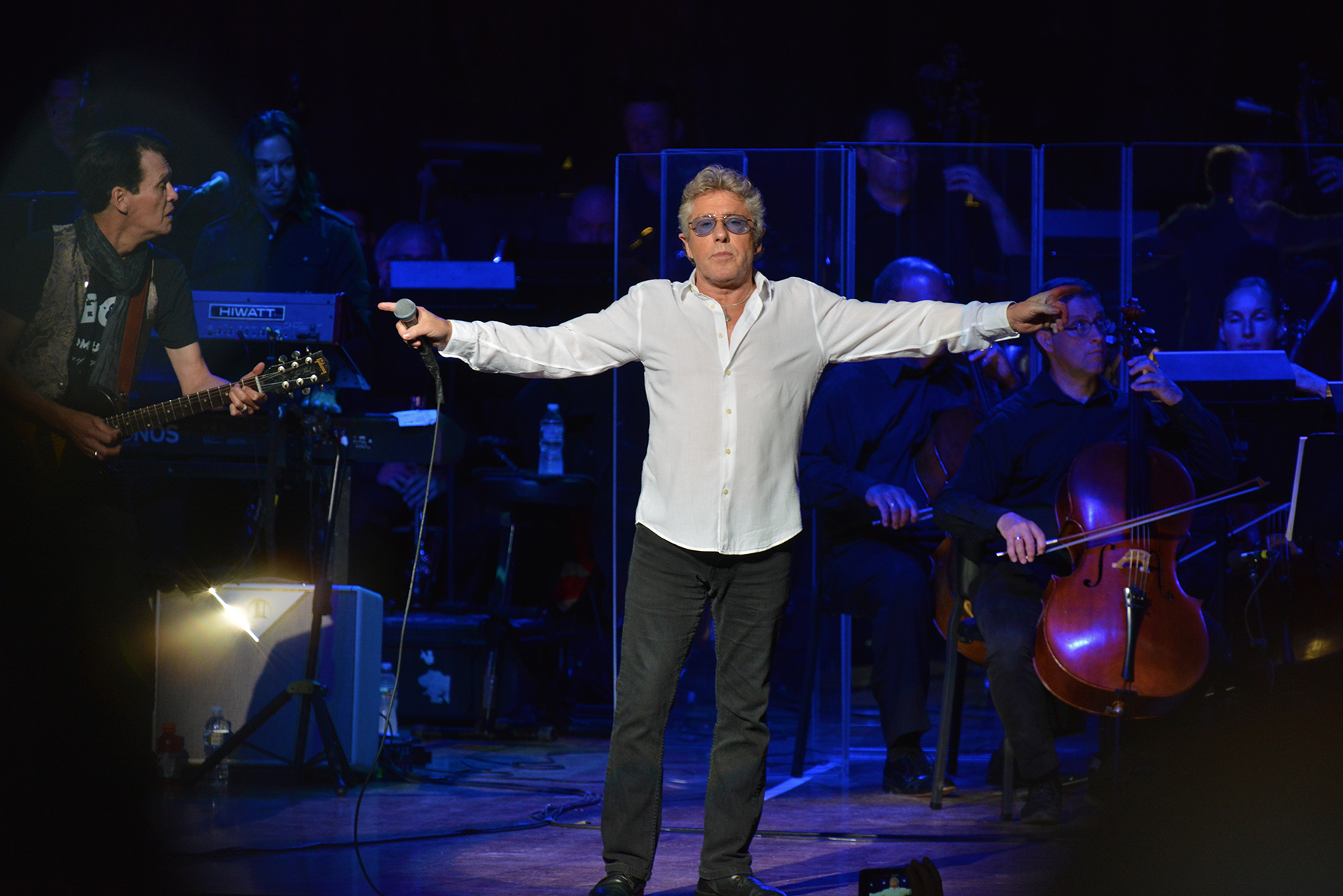 On a perfect Sunday night in Cuyahoga Falls, Ohio, Roger Daltrey and his band, along with The Cleveland Orchestra played rock opera classic Tommy in its entirety.  The venue was filled to capacity as people packed the lawn with all sorts of picnic baskets, blankets, and lawn chairs, waiting for their chance to see Daltrey perform the rock classic from 1969.

Not familiar with Tommy you say?  Well, Tommy is The Who’s double album originally released in May of 1969 and was The Who’s fourth studio album.  The album is said to be a story of a boy named Tommy, who bears witness to a tragic event early in his life.  As the story goes, his mother convinces him that he didn’t hear or see the tragedy and as a result, Tommy becomes deaf, dumb and blind to everything in the outside world.  The arrangements of the songs on the album relate to all the incidents in Tommy’s life.

Blossom Music Center, with thanks to The Cleveland Orchestra, donned two new and very large screens to the left and right of the stage which makes viewing a show like this much better than it previously did.  With the orchestra lead by Keith Levenson, seated (and standing) behind the band, Daltrey took the stage about 8:15 pm.

The album was played from beginning to end, and Daltrey never stopped the flow by stopping to speak to the audience.  Roger was in great form for the evening and seemed eager to perform his nearly 50-year-old album.  The audience was made up of different age groups that spans generations, they sat for most of the set and it really wasn’t until Pinball Wizard when they decided to stand in unison. Everyone knows the song Pinball Wizard, right?

Props to Cleveland Orchestra for the amazing arrangement they put together for this show.  During the song, Christmas, they played what I call ‘orchestra power chords’ during the song.  Short driving, get your blood pumping beats…and as the night progressed and got deeper into the setlist, the orchestra played better, harder and stronger than they did during the first few songs…perfectly matching the band in a note for note of harmonic balance.

Simon Townshend looked and sounded just like brother Pete as he sang lead vocals for Acid Queen and Sally Simpson.  Daltrey, now in his 70’s, can’t quite hit the high notes he did when he was in his 20’s, but hey, who cares, he still sounded great and with the backing of the orchestra, it made for one heck of an evening of music.

The band ended the set with We’re Not Gonna Take It and left for a brief break.  Roger and company returned to the stage and talked a bit about first playing Cleveland and then tore into two Who songs, Who Are You and Baba O’Riley.  It was now that everyone was up on their feet singing, clapping and showing their affection for The Who.  Roger Daltrey ended the show with one of his new songs, Always Heading Home.

Well, that was it…a fun-filled, musically satisfying evening featuring two of the best, Roger Daltrey of The Who and of course, the famous and always entertaining Cleveland Orchestra.